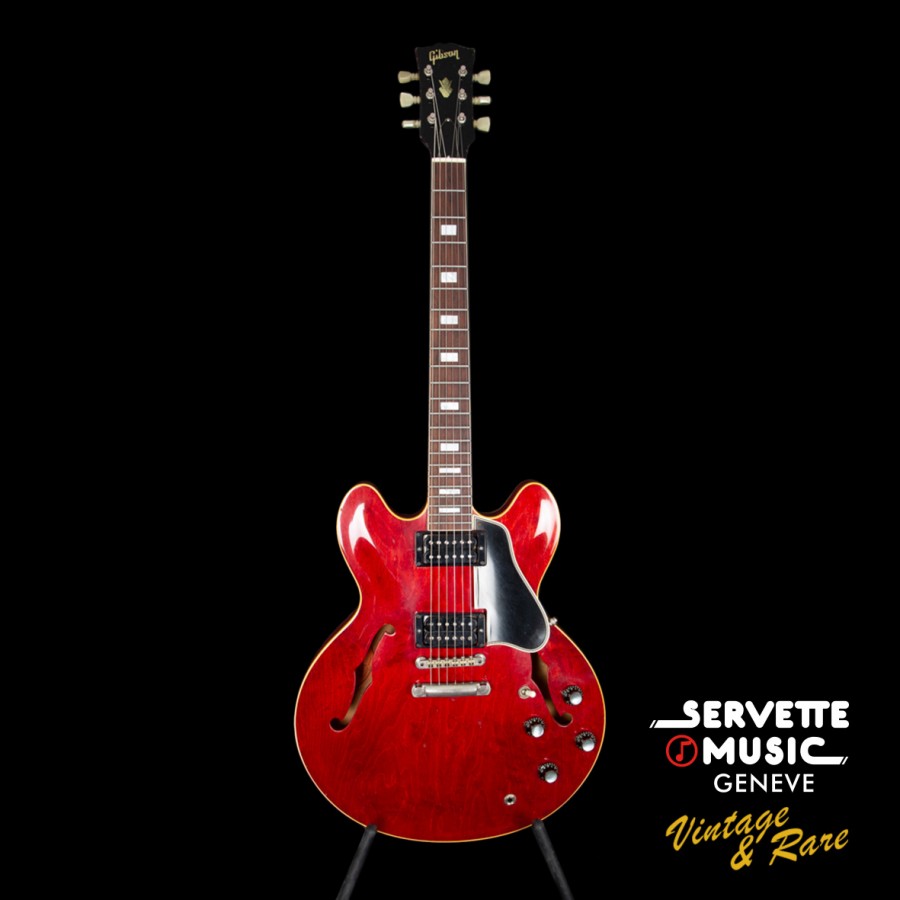 This exceptional guitar is a 1963 ES-335, in excellent condition (excellent condition). It came out of the Kalamazoo workshops with a Bigsby carrying a custom made plate, which was replaced by a Tune-O-Matic. The pickups are the original ones, and the covers have been removed, as was customary in order to increase the output level and add some brightness. The tuners have been changed for Grover, and the original ones have been put back. The case is original and in good condition.

Today perceived as a classic, the ES-335 is nevertheless one of Gibson's most modern designs, first introduced in the Gibson Gazette in 1958. It was the company's response to Fender's constant innovation, which was then eating up the electric guitar market share. With the ES-335, Gibson created an entirely new type of instrument, the Thinline. Initially designed for jazzmen, it was eventually adopted by bluesmen and rockers such as BB King, Chuck Berry, Keith Richards, Eric Clapton, and Larry Carlton.

The body is made of three layers of laminated maple and poplar. It features two F-holes, a gorgeous Cherry finish, and bears only a few marks that 60 years of history have left on it. The finish was done by staining the wood and then applying a thin layer of varnish. This gives it an intense color that still lets the wood's veins show through, and allows it to breathe and vibrate freely. The neck is mahogany, with a slightly thicker profile than early 1960s Les Pauls'. The fingerboard is made of rosewood and is decorated with the very classy block inlays introduced in 1963. The whole is very comfortable to play, sitting as well as standing. It is light and perfectly balanced.

The pickups are the original early Patent Number (pre-t top patent sticker), which are precisely what you would expect: powerful, round, creamy, open (the fact that the covers are removed helps bring some brightness and gain). They have that very singing tone and a slightly sweet feel thanks to the semi-hollow body construction. They react very well to potentiometer settings. The (original) electronics are flawless: not a sputter all the way through the pots, and the Jack output is solid.

This instrument exudes nobility, with a timeless charm. The years have given it an undeniably percussive character, which shines through tonally. The construction and finish are just incredibly mellow. This guitar is a fantastic investment for the musician and the collector alike, since it will never lose its value, nor its qualities.